John’s career John’s career is both extensive and impressive, beginning in 1977 with the creation of his own health food shop ‘Food for Living’, driven by his quest for a natural way to treat the digestive problems he had suffered in his teens.

His role in the industry became more influential when he was invited to join the Health Food Institute as a Board member and was honoured to be asked to become Chair of the institute where he has now served in that role for the last 11 years. As Chair, John injects tireless energy into promoting training and knowledge as the cornerstone of the industry, and ensuring the highest standards of excellence are met by all health food retailers and their staff. To see the press release for this award, click here.

Journalist of the Year – Amy Packer

This year’s Journalist of the Year award winner Amy Packer is an influential health editor for Reach PLC – one of Britain’s biggest newspaper groups, that includes the Daily Express, Daily Mirror and Daily Star.

Amy is an experienced journalist with over 20 years in the industry. Over the years, Amy has written about a huge range of health topics from cancer to sleeplessness and focuses on providing realistic and practical tips that readers can try whatever their budget, age or circumstances. To see the press release for this award, click here.

Robert’s career in the natural health industry has been a long and successful one, joining the family company, Nelsons, in 1987 after graduating from Trinity College, Dublin. Beginning in marketing, he became Managing Director in 1991, before assuming Chairmanship of the company in 2000.

As well his ‘day job’ at one of the most successful natural health companies in the industry, Robert is Chairman of the BAHM – the British Association of Homeopathic Manufacturers – and is a passionate advocate of complementary medicine and Natural Healthcare. He takes on many active roles across the natural healthcare industry, and has worked with numerous trade bodies and associations, both in the UK and around the world. To see the press release for this award, click here.

Journalist of the Year – Lucy Gornall

This year’s Journalist of the Year award winner Lucy Gornall is an influential health and fitness editor for some of the most well-known women’s magazines in the country. As well producing freelance fitness content for big names, Lucy currently edits the health and fitness content for seven magazines covering some of the biggest titles on the newsstand, including Fit & Well, Woman’s Own, Woman, Pick Me Up and Chat Magazine. To see the press release for this award, click here.

Lisa Bradley won for her dedication and passion towards communicating the developments and achievements of the sector for over two decades. Lisa founded Pegasus PR in her 20s with just one client, setting up as a limited company in 1995, when she acquired her first natural health clients. Pegasus is now the largest PR agency outside London, and a 5-time Agency of the Year Award Winner in 2016. To see the press release for this award, click here.

Journalist of the Year – Jo Waters

Jo Waters is a freelance health and medical writer for national newspapers and magazines. She is a regular feature writer for the Daily Mail’s Good Health section, an extensive list of consumer magazines and web sites and the author of several health books. To see the press release for this award, click here. 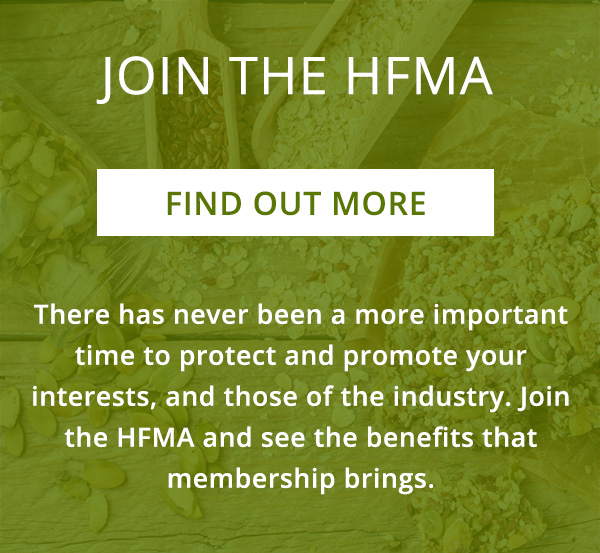 As the authoritative voice of the natural health industry, the HFMA supports the interests of its members with legislators and regulators; promotes industry best practice for product quality and safety; and provides responsible information for consumers.

HFMA is a proud founder member of its European federation, EHPM. Comprising national trade associations from 14 EU member states, EHPM acts as the HFMA’s eyes and ears in Brussels, which will be crucial in a pre- and post- Brexit environment. HFMA officials currently hold the positions of Vice-Chair of the federation and Vice-Chair of EHPM’s Botanicals and Communications working groups.
Twitter
3h

The HFMA, with other industry stakeholders, created HealthyDoesIt to raise awareness of natural health and increase footfall into health stores.

The HFMA Health of the Nation Survey.

10,000 people. The largest of its kind. Insight into consumer health trends. Positive news for our Industry.